our owner's book is now available for order from Amazon. Check out the bio to learn more about it. #newbook #prdoityourself #marketing
Our new mobile business card. Ask us how we can get you one. #abq #nm #rioranchonm #businesscard
#foodforthought #pr #socialmediamanagement #abq #nm #albuquerquenm #rioranchonm
Check out our new social media product. It makes your life easier. #abq #nm #socialmedianmanagement #rioranchonm

Buy me a coffee if you like my work 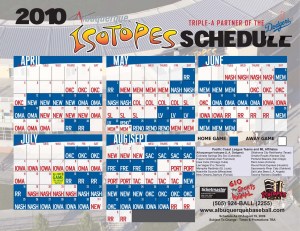 The Albuquerque Isotopes have announced their 2010 schedule, featuring a 72-game home slate that includes 12 weekends at Isotopes Park.
Albuquerque will begin their defense of their 2009 Pacific Coast League American Southern Division title on April 8 at Oklahoma City, before opening their home season on Monday, April 12 with a series against the New Orleans Zephyrs, Triple-A affiliate of the Florida Marlins.
When the Zephyr’s leave town, the Isotope’s homestand continues on with a four-game set with the Omaha Royals, Triple-A affiliate of the Kansas City Royals.
Isotopes fans will be able to see back-to-back fireworks nights in celebration of Independence Day, as Albuquerque lights up the skies on both July 2 and July 3.
The Dodger’s Triple-A partner will also be home for Mother’s Day, May 9, taking on the Nashville Sounds, Triple-A affiliate of the Milwaukee Brewers.
In the 2010 schedule, it features teams that haven’t played in the Duke City since 2008, including Las Vegas, top affiliate of the Toronto Blue Jays, marking the first time a Jays-affiliated team has ever played in Albuquerque. Sacramento, Triple-A affiliate of the Oakland A’s, and Fresno, affiliate of the San Francisco Giants will additionally make appearances at The Lab in 2010.
Albuquerque fans will also get their first look at the Reno Aces, Triple-A affiliate of the Arizona Diamondbacks, who entered the PCL this year, but whose only series with the Isotopes in 2009 was at Aces Ballpark.
Closing out the home schedule in August, when the pennant drive reaches a fever-pitch, the Isotopes will play 13 straight home games from August 21 to September 2, equaling the longest homestand in franchise history with the 13-game homestand this past season that allowed the Isotopes to clinch a playoff spot in front of their home fans.
All of the other promotions will be announced at a later date, but already locked into the schedule is a passel of fireworks nights, 50-cent Hot Dog Night, and a slew of great giveaways. According to a team release, a full set of promotional dates, as well as specific game times, will be announced soon.

A public relations and E-commerce consultant in New Mexico. I am also a longtime collector and online dealer of quality items. DM for all inquires. #thecollector #baseballcards #sports #antiques #collectibles #reseller View all posts by schodermedia